Heading into the afternoon matchups, three teams had a shot at two championship game. One team sported a 6-1 record and the other two carried 5-2 records. With the 6-1 team playing the other 5-2 team, all three teams COULD finish with the same record. That would mean we’d check the head-to-head records. Interestingly, each head-to-head matchup had resulted in a win and a loss for three teams. So, the next tie-breaker would be total runs allowed.

We didn’t worry about any of that, since none of it mattered unless we won. We faced Mitch, who is one of the harder throwers in the league. Since they’d allowed all pitchers to go 4 innings on Thursday instead of the normal max of 3 innings, we had a tough row to hoe. The bottom half of our order would face him to start the game. They set the tone for the game by hitting him hard, with Bill, Richard and Russ all scoring to get max runs for the inning. “Game Time Al” Ferlo drove in two runs with a timely single to right. Al didn’t have a lot of hits during the week, but this was incredibly timely!

Ric Power headed out for bottom of the inning and shut them down. One of the keys to our success has been good pitching, backed by solid defense. Ric held them scoreless in the first, gave up 3 to allow a tie in the second, but landed wrong on a pitch in the third. JT stepped up to the mound and their scoring was over.

I didn’t have much success against Mitch, but it didn’t matter, as most of our team did. I put the ball in play the second time around and we maxed out that inning as well. Evan, who had pitched 4 innings in the morning came on in the 5th, stymieing our bats. So, we entered the top of the 6th ahead 6-3.

I’d hit him really well last year, so I was being my usual positive verbal influence on the team, telling them we could hit him. We also had fans for the first time, with Craig’s family showing up to cheer on old #51. Evan must have been tired, but I think that our fans and my encouraging words helped. 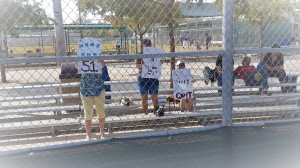 Whatever the reason, we just kept getting on base, piling on the runs. I put one in a challenging spot in the infield (only challenging in Ponce!) and reached on a 75-foot, weak liner. We racked up 8 runs, giving us 14 for the game. I think everyone scored, but this was my one really bad photo of the scoresheet.

The other game resulted in all three teams finishing with 6-2 records, and 1-1 records against each other. When they totaled the runs given up, we had 42, Team F had 44 and JR’s Team A had 46. So, we made the championship game!

I love Wood Bat Wednesday, because then everyone is playing MY game. Contact is about the same, but players who normally get hits from the aluminum of their bat instead of the quality of their swing become… unproductive. As we noticed in the morning game, this makes throwing strikes even more important.

In our 6th game, we played JR’s team. They’re all over 60 (except one) and live for wood bat play. Bob Duff started on the mound for them and frustrated us in the first. In the second, we managed to string together some hits, but this was another encounter with a big strike zone. I dro

ve in JT with a ground out to first on a ball that may have been high and outside — I couldn’t afford to take a chance, but knew I could knock it down in the direction of first base. I drove in another (great hustle by Craig Tasens, as usual) on a sky high single too deep for third and too close to the line for the left fielder.

They had gotten to us, though, pushing across 7 runs in the first three innings. JT came in to try shutting them down, but they managed to add two after we added two in the 5th. They ended up edged us, 9-5. Well, it seemed like a tight game all afternoon.

We’re 4-2 and close enough to retain those championship hopes.

First pitch that I saw from JR, I smacked to left center. When I saw the left fielder turn his back to chase it, I knew I had my goal of getting an extra base hit.

It’s great to be playing baseball. We’ve got a very good team. We beat JRs guys 5-4 in the bottom of the 6th. I contributed on both offense and defense.

One inning in right with a good catch and a good backup on a throw to first. Then multiple innings at third with a few plays. So, reasonable defense.

Had a double, scored a run and drove another in. On that double, I had to stay on a line drive just out of the shortstop’s reach. Then on the next hitter, I went to steal after 4 pitches and Shaun Quill hit a grounder behind me. I headed right home in case they had a double play. They only got the lead runner.

We were using a default lineup – just having everyone hit in alphabetical order while our coach, Rick Knapp, figured everything out.

Rick’s a lifetime baseball man, having served as a pitching coach for the Tigers and coordinated minor league pitching for the Twins, Royals and Dodgers. His last job was as the coordinator/consultant for MLB International, which had him trotting the globe to develop pitching worldwide. There’s a great interview with Rick about that job on Krush Performance. The entire coaching staff for the week is made up guys like Rick. Major league experience in managing, coaching and playing, while still loving the game enough to spare a week for a bunch of Old Men Playing Baseball.

In the third, our alphabetical lineup produced again. Jonathan “JT” Taylor led off the inning with a double and was driven in by Ed Confino after a walk to Bill Arnold. Al Ferlo, who struggled in the batting cage, drove in a run by hitting the ball hard. It may have been scored an error, but that run was important. My own hard-hit ball drove in the third run on an error.

So, we got to the 4th all tied up. JT came in to pitch and kept them off the board for the final two innings. A couple of hard hit balls and some good base running allowed Shaun Quill to score with Craig Tasens picking up the game-winning RBI.

Great start for the week.