I spent a few eventful innings at short and third, but the ball was eating me up. Fortunately, I still made a few throws to get guys out. That included throwing the last batter out on a falling, but full effort, throw. Fortunately, Rick Powers is really tall. 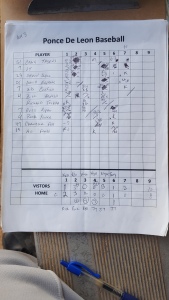 I managed to go 2 for 3, but drove on a couple of runs. My first hit didn’t go 14 feet, but it was in the right spot, driving in a run and not drawing a throw. I had a solid drive up the middle for my second hit. When we were tied after 6, we started a “shootout” inning. In the shootout, you come to the plate with 2 strikes. This particular umpire’s strike zone was gigantic, so I punched a grounder to first that drove in a run on a pitch high and outside.

We won by a run to make us the only undefeated team.